Inaugurated in Berlin in 2014 by Mira Sanders and Cédric Noël, THE MENTAL MASONRY LAB is a laboratory that puts imagination at the centre of an apparatus for action and reflection in line with essentially urban situations.

Too many rooms, too many views at the Eden Hotel 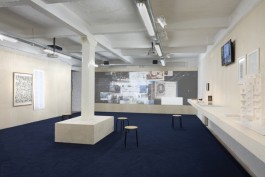 Since 2013, the Hotel Eden in Geneva is the neighbour of an imposing Campus that is dedicated to biotechnology, housing the projects Blue Brain and Human Brain (the last one endowed with a European subsidy of 1 billion euros). Their joined goals are the cartography of the brain and the creation of a synthetic brain through the simulation of the cerebral functions. Against the background plays violent criticism of the international scientific community, the global race in Artificial Intelligence and the dream to commission an artificial human brain.

The research is backed by the hypothesis of a relation between an ecosystem and an artificial life. It is based on the book “Métamorphoses de l’intelligence – Que faire de leur cerveau bleu?” (2017, PUF) in which philosopher Catherine Malabou exposes the challenge to initiate the relation between the living and the non-living in another adventure than the outdated one of their difference.

Firstly, it involves formulating a criticism of the current representations (images, narratives) of our relations with the A.I. Secondly, the researchers, in a dynamic residence, study the projection of this brain on the Geneva neighbourhood of Sécheron. The challenge is to reveal a phantom as well as addressing a state of affairs of our relation to that fabrication. The notion of belief insinuated in the research needs to be examined – belief in a return of investment, belief in an apparition ... The Hotel Eden (both hotel and Eden), as intermediary, will orientate the research from the point of view of its structure and the treatment of the in situ investigations.

Exhibition under the title Eden Studies, at WIELS (Brussels BE) in the context of "Risquons-Tout" Open School, 2020-2021.